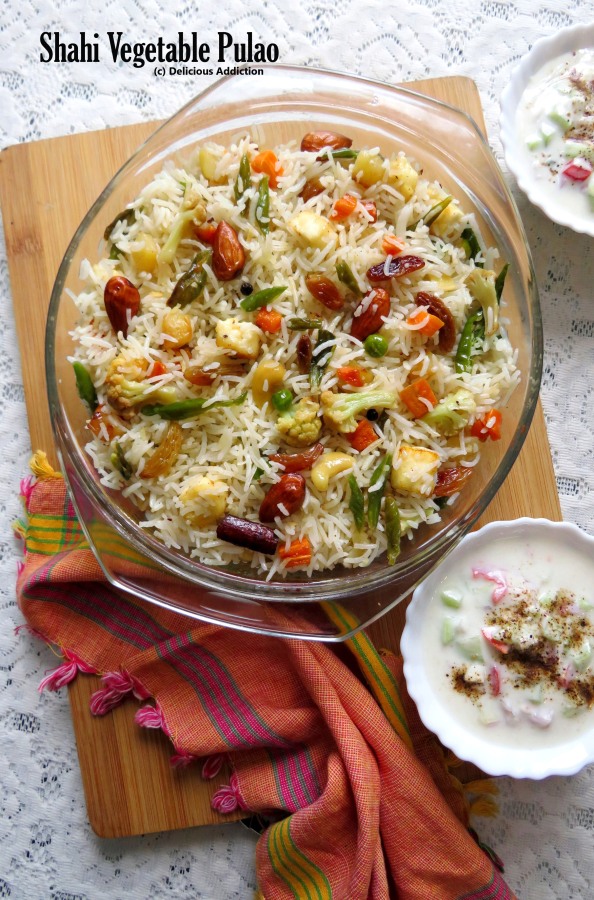 During winter it is a wonderful experience to visit any fresh vegetable market. Market is full of colourful and green vegetables. Any type of fresh vegetables and / or rice dish is very common these days. I love to prepare these types of mixed vegetable rice dishes for our meal. Though this is not a… END_OF_DOCUMENT_TOKEN_TO_BE_REPLACED

‘Biryani’ is such a dish that is favourite to all I guess. But when we prepare for packed lunch/dinner or guests I feel it is easier to eat if it is prepared with boneless chicken. Since I and a kebab lover, I tried it with Chicken Tikka. The smoky flavor infused with the flavor of… END_OF_DOCUMENT_TOKEN_TO_BE_REPLACED

Here is a one-pot easy recipe for a quick fix lunch or dinner for veg lovers. I love this one pot rice dish. As I put everything together, it gives a very good flavour in the dish. All the ingredients are easily available or you already having in your pantry. Do try this recipe when… END_OF_DOCUMENT_TOKEN_TO_BE_REPLACED

‘Potol’ or pointed gourd is a staple in Bong kitchen during summer. Most of the people do not like to eat ‘Potol’. But if you prepare this way and serve them they are going to love it. ‘Chaal Potol’ is a traditional recipe where pointed gourd is cooked with aromatic ‘Bobindobhog Rice’. Here is the… END_OF_DOCUMENT_TOKEN_TO_BE_REPLACED

I don’t think I need any introduction or explanation for this recipe. Egg Biryani is cooked in every house when the stock of meat or fish gets exhausted and members do not want to have regular ‘Egg Curry‘ and rice. This is the easiest way of cooking Egg Biryani, that I follow at my home.… END_OF_DOCUMENT_TOKEN_TO_BE_REPLACED

We all love noodles… isn’t it? In India we have versatile variations in making it. For a change try this ‘desi’ form of noodles… that is ‘Upma’ made with vermicelli. It is very easy to prepare and awesome in taste. Here goes the recipe… Ingredients: Vermicelli – 150 gms Blanched Vegetables – 1 cup (Carrot,… END_OF_DOCUMENT_TOKEN_TO_BE_REPLACED

I was looking for a easy rice preparation or pulao that can be served with both vegetarian and non vegetarian dishes. Then one of my friend shared this recipe to me. When I cooking for the first time, I was not sure that it will turn out so good! Most importantly it requires very few… END_OF_DOCUMENT_TOKEN_TO_BE_REPLACED

Last year while my visit to Mumbai I got opportunity to taste various Mumbai special dishes like Vada Pav, Pav Bhaji, Misal Pav, Masala Pav, Keema Pav, Tava Pulao and so on. I liked the taste of pav bhaji masala with rice. Never ever though that pav bhaji masala can be used other than ‘bhaji’… END_OF_DOCUMENT_TOKEN_TO_BE_REPLACED 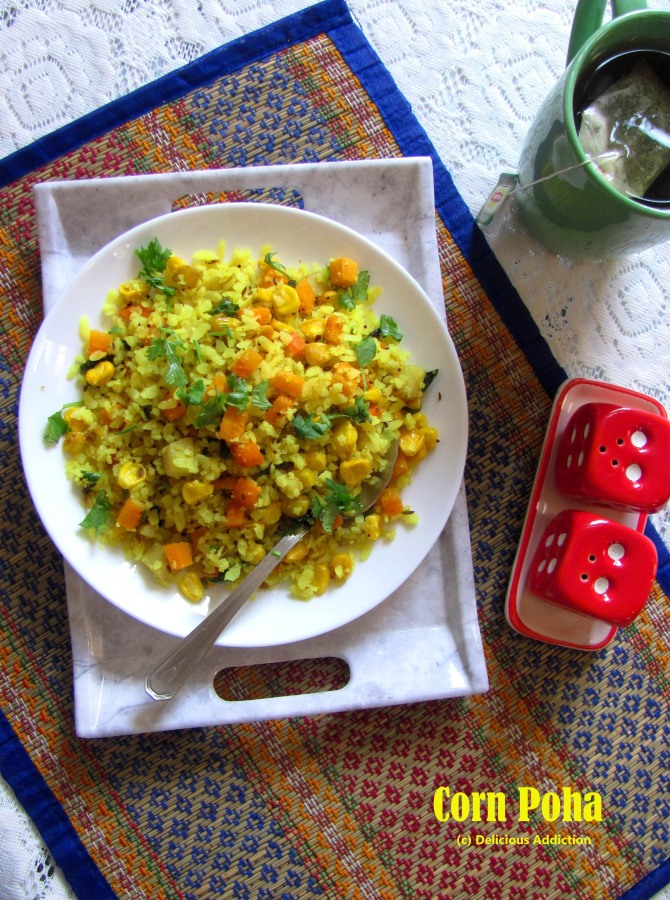 ‘Poha’ or flattened rice is a very popular breakfast option in India specially in Maharashtra & Gujarat. In Gujarat, they like to add sugar in poha, as they like the taste of poha a little sweet but in Maharashtra it is normally savoury in taste. I had a packet of frozen corn in my refrigerator… END_OF_DOCUMENT_TOKEN_TO_BE_REPLACED

Calcutta or Kolkata Biryani evolved from the Lucknow style, when Awadh’s last Nawab Wajid Ali Shah was exiled in 1856 to the Kolkata suburb of Metiabruz. Shah brought his personal chef with him. The poorer households of Kolkata, which could not afford meat, used potatoes instead, which went on to become a specialty of the… END_OF_DOCUMENT_TOKEN_TO_BE_REPLACED 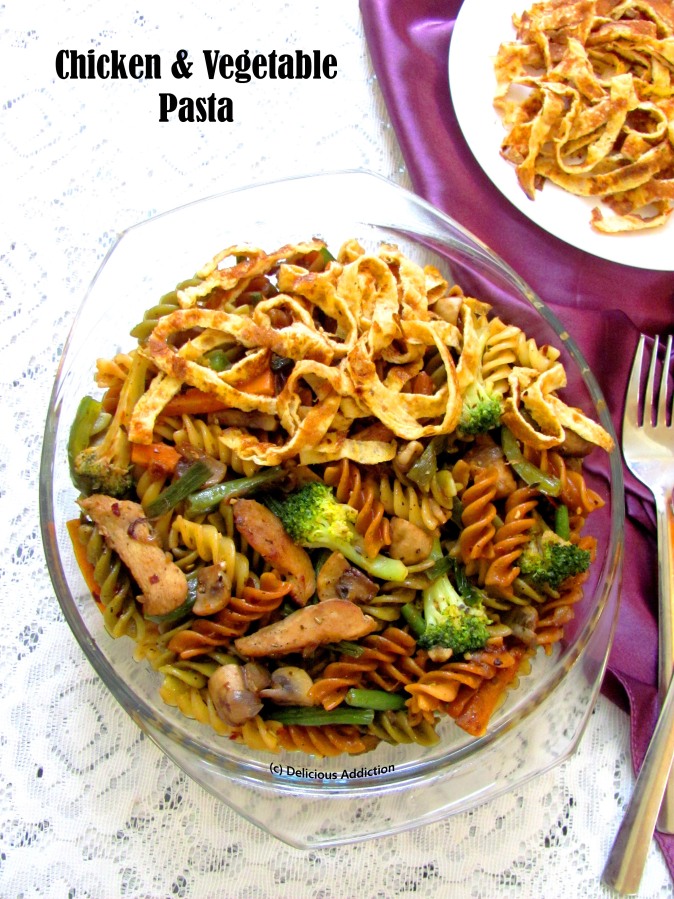 When you want to sort your dinner with one pot meals, pasta is ideal option. I always prefer to add vegetables in pasta. I have added carrot, beans, capsicum and broccoli. Add vegetables as per your choice. For decoration; I have made omelette and cut it into thin ribbons. It is completely optional. Ingredients: Pasta… END_OF_DOCUMENT_TOKEN_TO_BE_REPLACED

Welcome to my food world!

I am a simple girl from a very simple Bengali family with rich family culture, tradition and values. So mostly what I cook is "Bengali Cuisine". But the pleasure of eating has turned me into a self taught home chef! It gives immense pleasure and satisfaction when for a self taught cook when somebody gives compliments of the food. To me cooking is a never ending learning process and I'm still a learner. Delicious Addiction is not only a recipe sharing platform but much more than it. It is the notebook where I share my family recipes from where my next generation could learn and can imbibe family tradition. Welcome to my food world!